First of all I would like you people to forgive me because its the 2nd time it happened. I should have published it yesterday but due to a circumstances I couldn’t do so. I can’t promise it won’t happen,  that would be a lie. So I’ll hope you,  my friends will bear with it.

The poem that we will discuss today is called CLENCHED Soul. It was written by a famous Chilean poet who was a communist. This is quite rarely seen,  A romantic national hero. I suppose you would want to know a little more about him, let me give you a short tour of his heroic life.
Our poet of the day is Pablo Neruda. Did the shock wear off? Lets start with his birthday. He was born in July 12 , 1904 , which would be tomorrow. You can witness it being celebrated by his literary fans. His real name was Neftali Ricardo Reyes Basoalto but he changed it to Pablo Neruda to avoid being caught by his father for writing poems. A Czech poet Jan Neruda inspired him from whom he took his last name.
He first published poems at the age of 13. His father was opposed to his son’s interest in writing,  nevertheless his teachers always encouraged him to write.
As he grew up the political scenario in Latin America changed and he turned to a Communist who fought for world unity and peace,  persecuted in his country and forced to exile.
Now we should know about the person who inspired him to write poems on love. She was his second wife and lover till his last breath Matilda Urrutia.  They met in Santiago in 1946, when she was working as a physical therapist in Chile. She was the muse for Los Versos del Capitan in 1951. They didn’t get married immediately because of various reasons so to hide their relationship from the Chilean people he built her a house called La Chascona in Santiago.  Later they got married,  through time and time again they had to fight to maintain a stable relationship. They had trust on each other and this helped them survive. 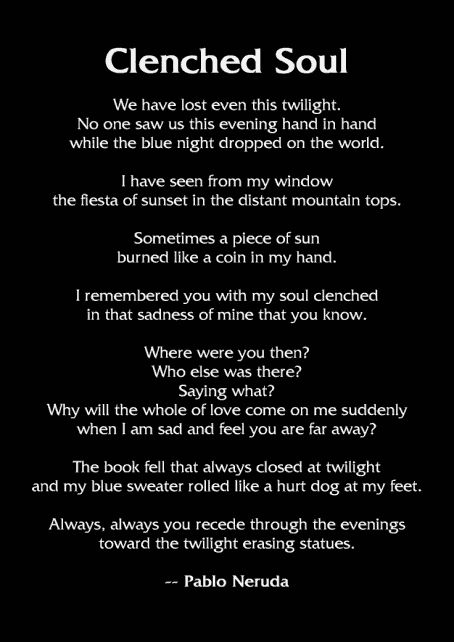 Time to discuss about the poem. Here the poet is speaking about his lover at different time and space. In the first stanza he says that they lost a chance of fleeing that twilight. They could elope,  the situation was in their side,  they walked hand -in-hand and no one saw them.
In the third , fourth and fifth stanza he says the fiesta of sunset in mountain tops reminded him of his lover.  It pained him so much that his skin felt like burning under the sun.

In the next stanza he wants to know that during those lonely where had his lover gone, he wants to know who or what held her interest so much that she couldn’t spare sometime for him.  Where was she when he needed her the most. He had been left all alone to cope with sad memories. 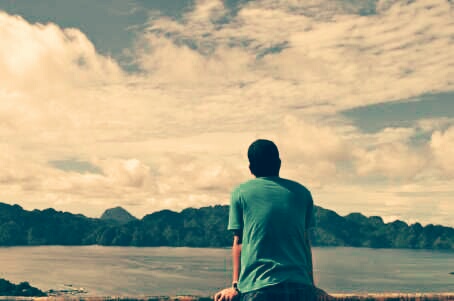 The last two stanzas were little difficult for me to understand,  but somehow I did manage . When he says the book fell that always closed at twilight,  he used the book as a metaphor. The book is his mind. When he had opened  it for her to see she couldn’t see past it.  After the time is over he closes it forever watching her from far away.
This thing happens in real life when we miss an opportunity then we’re left only with one option watch it from far.
Since its a discussion so I would everyone to participate , share your views through comments and if I made any mistake please correct it.

This site uses Akismet to reduce spam. Learn how your comment data is processed.